According to the latest RP Data, the TOP 10 highest yielding suburbs for houses in Australia are:

Located 340 kilometres west of Brisbane on the Warrego Highway, Miles is a rural town with a growing prevalence of LNG projects with a population of only 1,856 according to 2011 Census data.

Newman is a mining town located 1,186 kilometres north of Perth. The town is served by Newman Airport.

Kambalda East had a population of 851 at the 2011 Census and 56.6 per cent of homes were owner-occupied.

Queenstown is located in the West Coast region of Tasmania. The suburb had a population of 1,976 in 2011 according to Census data.

Broken Hill is an isolated mining town with the closest major city (Adelaide) more than 500 kilometres away. Broken Hill is Australia’s longest-lived mining city and in 2011, 74.6% of homes were owner-occupied.

South Hedland had a population of 9,381 at the 2011 Census and was originally designed as a satellite city to Port Hedland.

The second largest town in the Pilbara region of Western Australia, Port Hedland is known for the shipment of iron ore. In 2011, only 19.6% of homes in Port Hedland were owner occupied.

This small mining town is located 616 kilometres east of Perth. Kambalda was originally mined for gold but nickel was discovered soon after. In 2011, 54.5% of Kambalda West homes were owner occupied.

Baynton is located in the Pilbara region of Western Australia. Neighbouring suburbs include Karratha, Nickol, Pegs Creek and Millars Well.

Cloncurry is located 1,707 kilometres north west of Brisbane. The main industry in Cloncurry is Cattle grazing. In 2011, the population of Cloncurry was 2,804 and 38.5 per cent of homes were owner-occupied according to Census data.

The following chart shows the distribution (both number and percentage) of the top 10 suburbs across different states. 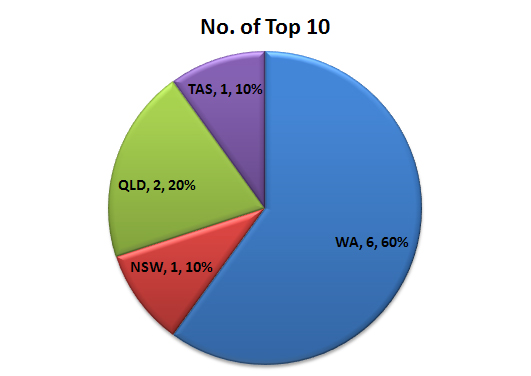