The survey looks at 272 metropolitan markets in Australia, the US, the UK, Canada, Ireland and New Zealand. Housing affordability is measured by using the Median Multiple (as shown in the table above), which is the median house price divided by the median household income.

12 out of the top 20 most unaffordable cities are in Australia. The least affordable cities are Sydney, Sunshine Coast, Darwin and Gold Coast, followed by Melbourne, Wollongong, Adelaide, Newcastle, Mandurah, Bundaberg, Perth, and Hobart (click the image below to see the full size table). 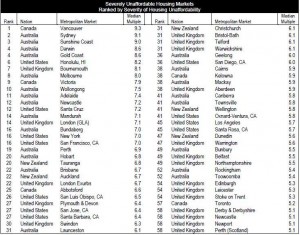 From a total of 23 Australian cities and regions included in Demographia’s 2010 International Housing Affordability Survey, 22 were labelled severely unaffordable.